It has been posthumously edited (including minor completions); re-worked; extensively re-voiced for modern melody instrument & piano;
and presented via a suite of three different scores for the 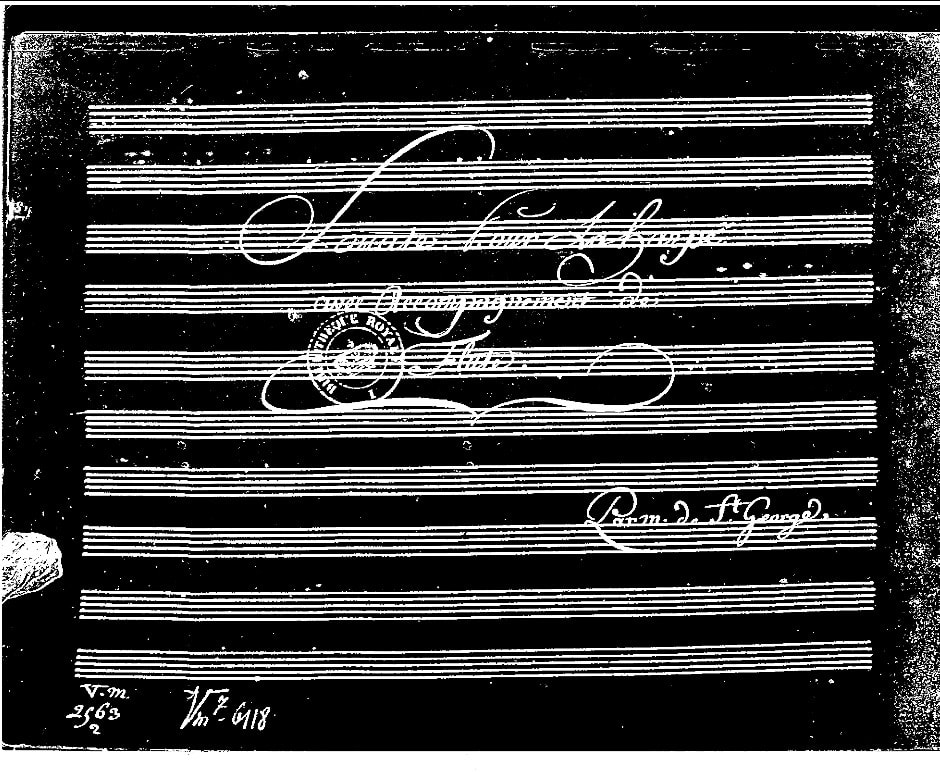 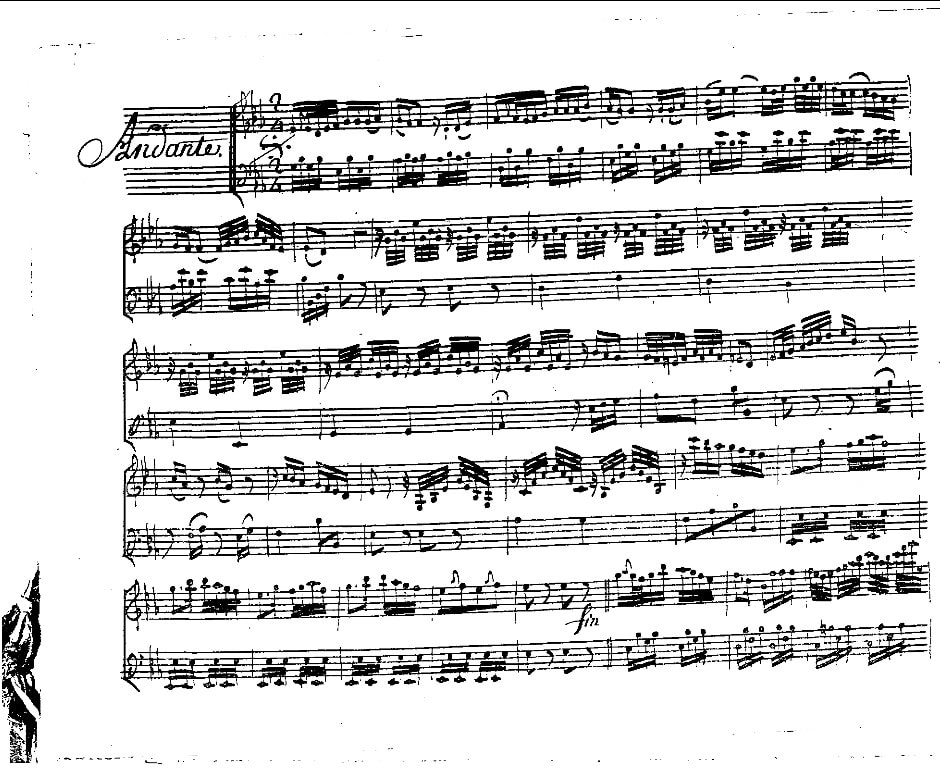 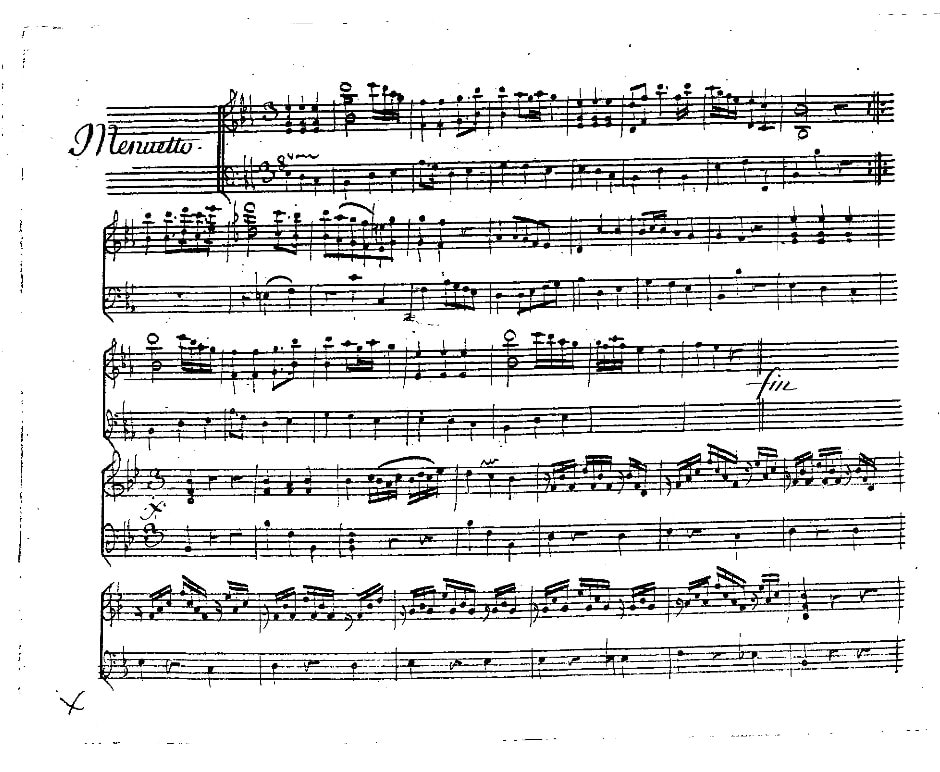 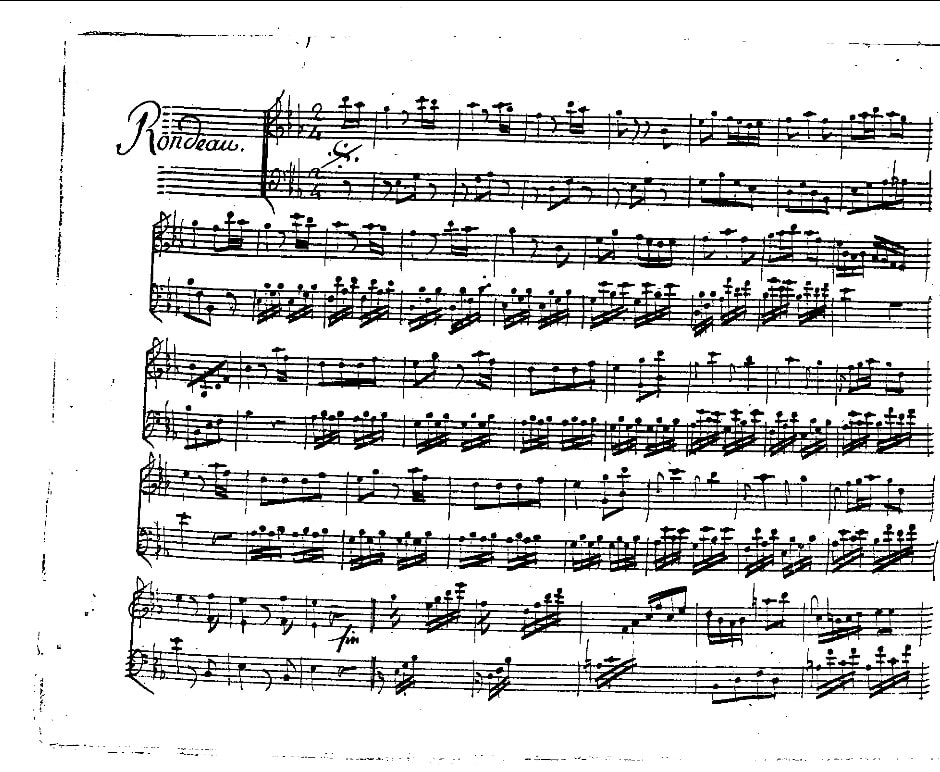 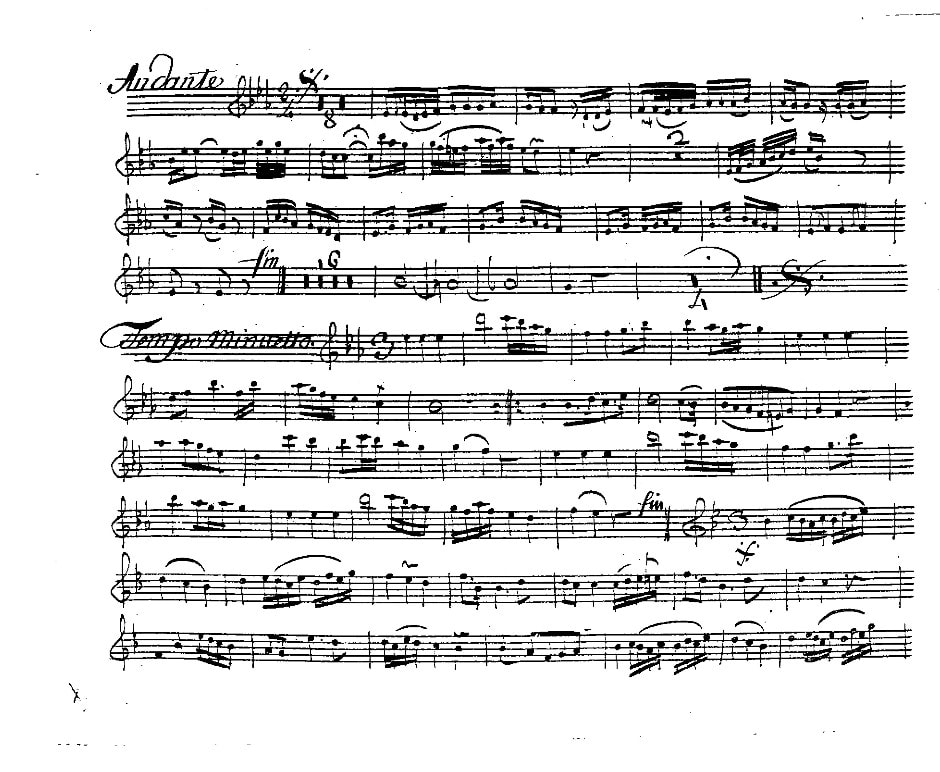 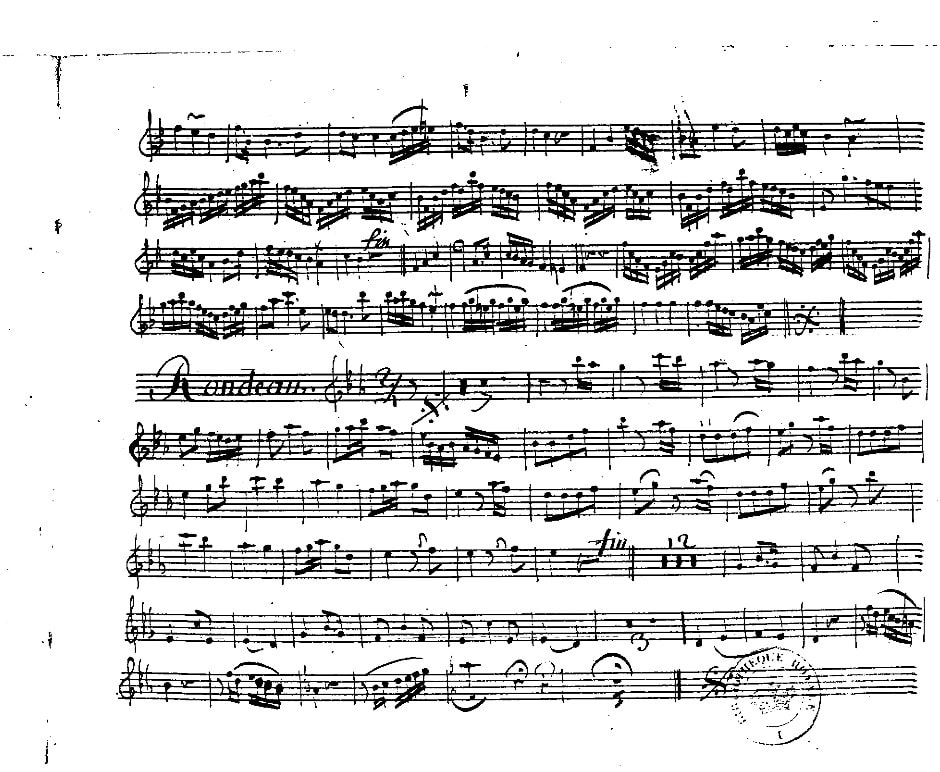 ​Biography ~ Joseph Bologne, Chevalier de Saint-Georges (1745-1799)
Joseph Bologne was an Afro-French composer whose successful life in ancien régime Paris was changed for ever by the French Revolution. Born in Guadeloupe in 1745, he was the son of a French aristocrat and plantation owner – a M. de Saint-Georges – and his young slave mistress, Nanon. At the age of seven, he sailed for Paris with his family, where he was fully-acknowledged by his father, and brought up as his heir, to the greatest extent possible under France’s Code Noir.

Saint-Georges studied the violin & fencing, becoming - in time - France’s premier swordsman. He was also a musical associate of Mozart, Haydn, Glück and Queen Marie Antoinette. He conducted an orchestra at the Palais de Soubise; composed many violin concerti, symphonies and operas; and produced some chamber music – including a set of violin duets, and several string quartets.

From 1780 onwards, Saint-Georges became more politically-active and involved in the anti-slavery movement. When the French Revolution took place, he turned his back on the Queen and his aristocratic associates, and threw in his lot with the revolutionaries. He became the commander of a cavalry regiment of Black soldiers: but his revolutionary career was largely unsuccessful. He died in Paris of natural causes, aged fifty-three.
Please click on the score you wish to purchase, to access the June Emerson Wind Music Sales Page.
Solo oboist Sarah Roper rehearses the sonata with pianist David Korevaar - Three Trinity Laban saxophonists premiere the Saxophone arrangement with pianist Daniel King Smith -  TL Saxophone Professor Melanie Henry performs the abridged Andante (which was created for the ABRSM Grade 5 Saxophone Exam Syllabus), with pianist Robert Thompson.
New Performance & Interview Videos!

Free piano accompaniment samples available below
The New Chevalier Sonata is a re-worked, re-voiced and edited version of Chevalier's problematic, previously-unpublished and unedited manuscript Sonata for the Harp, with obbligato Flute.

I first came across this work in 2009, when invited to perform at a conference of music from the African diaspora in the USA.  This piece was performed by flautist Wendy Hymes & pianist Silvia Belfiore, and I was immediately struck by the elegance and tunefulness of the Andante.  It was not until 2012/13, however, that I came to play it myself twice in recital - with a harpist.

I found the piece strangely unsatisfactory to perform, but I did not know why, at that time.  In the outer two movements, very long periods were spent tacet, whilst the harp played solo; and then by contrast - in the central minuet - I found myself navigating long passages with nowhere to breathe.

In 2020, an American colleague mentioned the problematic 'voice-leading'.  I didn't know what that term meant (as we generally use the term 'part-writing' in England).  I looked it up, and suddenly - considering the piece as the composer I had now become (as opposed to the performer I had previously been) - it all fell into place.  I could see exactly what was wrong with it, and decided to fix it up, in order to create a viable duo recital piece for solo instrument and piano.

My estimate for the date of composition of the original work is 1778-1780.  It comes across as a mature work - as regards melodic invention - but the involvement of the harp suggests pre-revolutionary aristocratic salon music.  In the accompanying image, you can see Queen Marie Antoinette - a musical associate of Saint-Georges - seated with her harp. 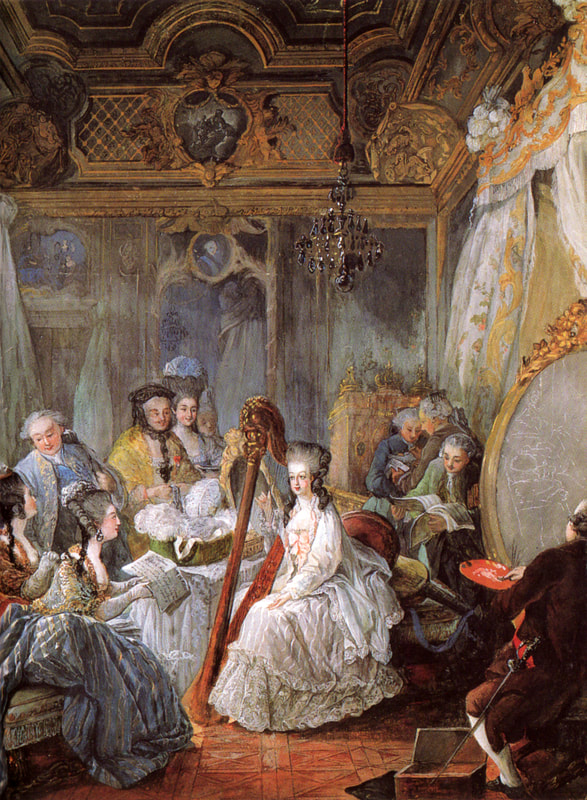 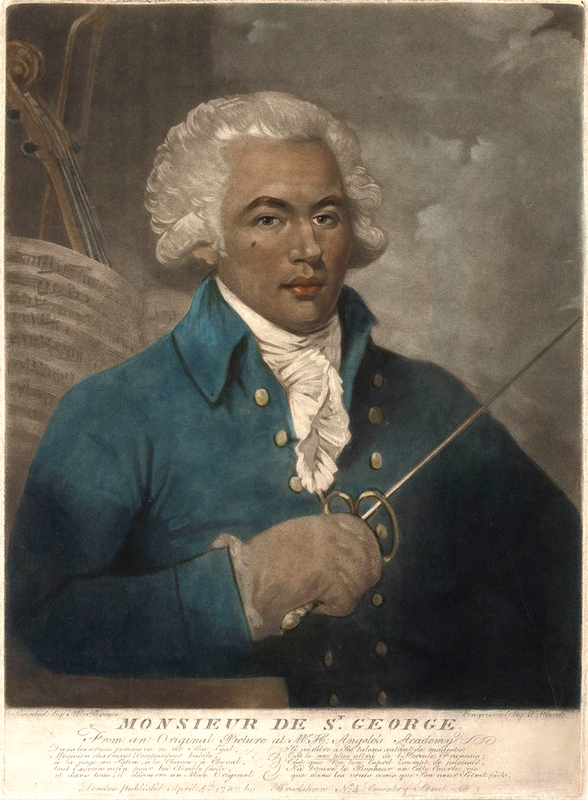 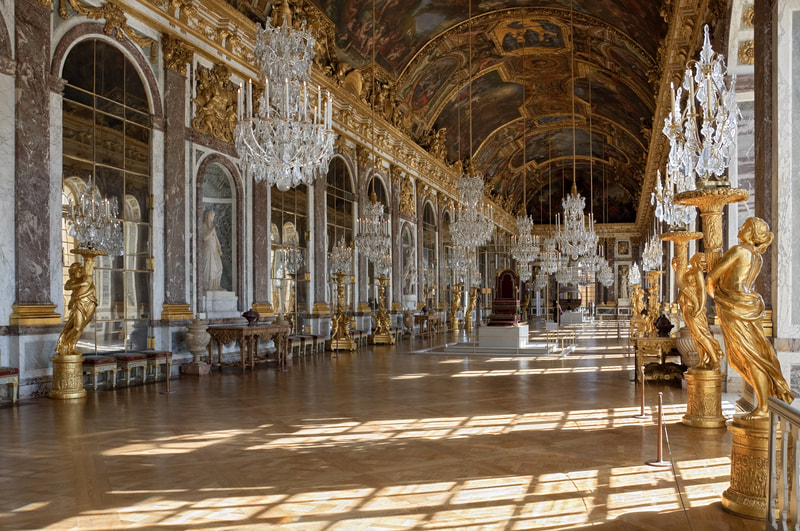 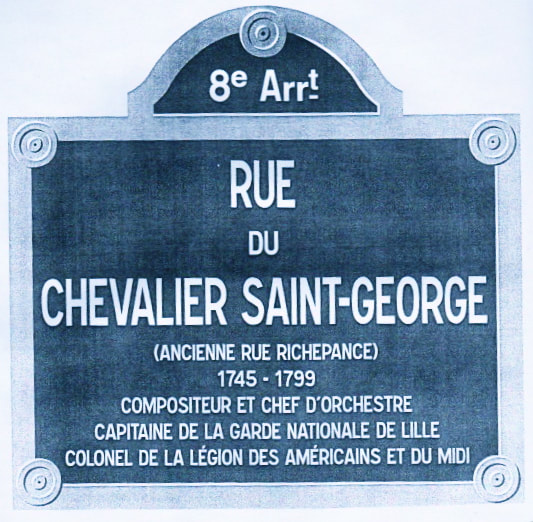 The original score is an unpublished and unedited manuscript.  In addition to numerous theoretical errors (such as manifold missing accidentals and a failure to change key signature where required in the Andante's B section), it also features frequent unison/octave doubling and occasional open fifths without thirds.  The piece was also not entirely finished, with some bars missing in the bass line, including at a cadential point.
​
There is a lack of consistency in the flute-writing, which renders the original piece unsatisfactory to modern ears - particularly when performed with piano.  Unison doubling of high harp notes sounds unpleasant, when an instrument such as the modern oboe doubles notes in the piano's upper register.  Neither modern instrument needs the other's help, in that way!  This particular problem occurs during passages where Saint-Georges used the flute as a form of amplification for the least resonant strings on the Classical harp, rather than as a melody instrument in its own right.

Following on from this, the long tacets in the first and third movements render the melodic instrumentalist somewhat superfluous on stage.  To stand in silence for twenty bars whilst the pianist plays an extravaganza of notes - then to play four solitary, pianissimo minims prior to the pianist's florid cadenza and solo recapitulation, leaves the melodic instrumentalist looking too much like a lemon, for comfort!  The original composition is simply not what the modern ear expects to hear in a recital piece for two players: and is likely to be regarded as unsatisfactory by modern performers (such as myself, for example).

Because the music itself is so attractive, it seemed a great shame not to tackle these issues, and to see if I could create a 'normal' sonata from it, in order to add value to my colleagues' recitals.  There is a great need for genuine Classical-period recital repertoire for oboists and other wind players: and this - combined with Saint-Georges' status as a renowned composer of African descent - made the task of re-working the piece seem to be the correct direction of travel.

To give a summary of the work carried out, I have digitised the score; tidied up the key signatures where necessary; filled in thirds and sixths where they were missing (in many places); analysed and tidied up accidentals; taken material from the treble harp part and reassigned it to the melody instrument; filled in the resulting harmonic gap with innocuous crotchets and quavers (quarters and eighths); reassigned melodic material to the piano in the Tempo Minuetto - in order to create breathing space for the soloist; and done nearly all of the above to the Rondeau, which was the weakest movement of the three.  Throughout the piece, I have striven to create an even three-part texture, with occasional fuller chords - as opposed to continuing with the problematic unevenness of texture found in the original sonata.  This involved composing internal harmony lines, at certain points in the first and third movements.

I have also added didactic articulation to the Saxophone score (as many saxophonists rarely play music from this period); and articulation suggestions to the C score.

Thus far, I have created three performance scores. The first is for Oboe/Clarinet in Bb/Violin, in the original key of Eb major. The second is for Alto Saxophone.  The dynamics and articulation differ between the two; and the Saxophone edition commences in a different key (Bb major).

Although modern Flute players can certainly use the Oboe score, I invite flautists to consider the third score, which has been transposed upwards to G major.  Created for the Treble Recorder, it is better suited to the modern Flute's tessiatura.​
COPYRIGHT NOTICE
The New Chevalier Sonata (c. 1779/2020-2022) ​by Bologne-Saint-Georges/Talbot-Howard
Copyright: 2022 Althea Talbot-Howard
Please note - with due care, attention and understanding - that copyright is hereby asserted over this re-worked sonata, owing to the extensive compositional intervention, and the number and nature of the changes to the original material.  This means that 'The New Chevalier Sonata' is not in the public domain.  However, the source manuscript of the Sonata for Harp & obbligato Flute remains in the public domain.